Brad Pitt's Not Available, So...

I stumbled across this story sparker idea quite by accident over the weekend, and it was so good I knew I had to pass it on. You're going to think you know what it is before I'm done... but I'm not so sure you'll guess right.

Most of you are familiar with the Harry Potter books, I suppose. There are 7 books in the series:
There's nothing new there, of course. But over the weekend I discovered a Tumblr site that does Harry Potter humor. (Just a warning to those of you who decide to check it out: You may find some of it objectionable. But a lot of it is just hilarious!) And on that site I found a list titled The Books from Ron’s Point of View. Here's the list:
I'd say that list is slightly different from the first, wouldn't you?

Let's say you've got a great idea for a story... but for some reason your story is "stuck." It just won't work, no matter what you do.

Perhaps you're writing about the wrong character!

Well, maybe not, but perhaps you need to look at your story from a different angle. Telling the story from another character's viewpoint may be just what you need to get things going again.

Now, let me make something clear. This sparker is not about changing your story's narrator, which is what most people would immediately try to do. Look back at the Harry vs. Ron examples. Both lists are the same books... but while the first one tells how Harry understands the story as it happens to him, the second tells how Ron understands the exact same story happening to him!

Take the second book, Chamber of Secrets. Ginnie Weasley, one of the book's main characters, is Harry's friend but she's Ron's sister. Harry approaches the problem from a sense of revenge; anything involving Voldemort (the wizard who killed his parents) makes him want to take action. Ron, however, approaches all of this from a sense of fear; for him, Voldemort is a boogeyman whose name isn't even supposed to be spoken out loud! Both boys experience the same events, but a different story, as this photo from the blog demonstrates! 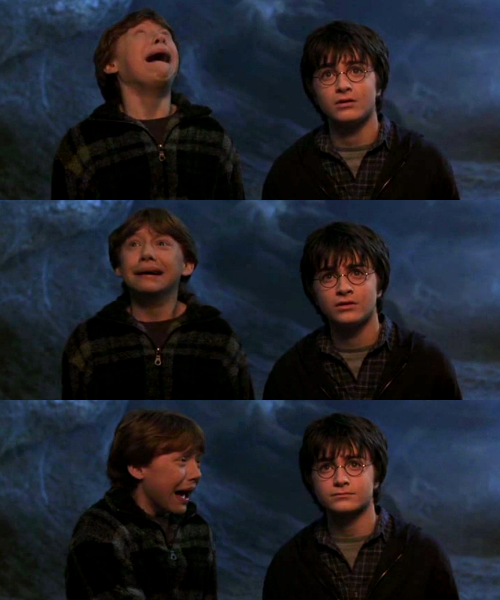 So next time you get stuck, try doing your story using a different character. Or, if you have no story idea, take a story you like and put your character in it. I bet you get some very different ideas doing that!
Posted by Mick at 11:14 PM