Where Do You Get Ideas?

I guess every writer asks that question at one time or another. Judging from the books I've read, it's apparently the most-asked question that published authors hear. Some just say “Ideas are everywhere" and then give a bunch of examples. But that doesn't really answer the question, does it? Most of those listeners probably just interpret that answer as "I can't look there because he (or she) already used those ideas."

I've also read some really funny answers. My favorite is “I get mine mail-order from an old alchemist near Stonehenge.” I don't remember where I read that one, but it stuck with me. I do remember the writer refusing to give the alchemist's address -- a trade secret, apparently. 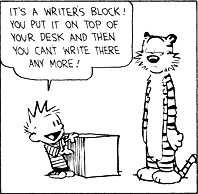 But sometimes I wonder if those evasive answers just mean that nobody really knows the answer. I mean, why is it so hard to answer such a simple question? Or are the writers just afraid that, if they probe the question too much, the ideas will start hiding from them?

I think most writers believe storytelling is primarily a matter of inspiration. There’s something mystical about creating a story, and we can put a great deal of work into it and still fall flat on our faces. As a result, we figure there's some cosmic secret that you have to know in order to be successful. Don't get me wrong -- inspiration is a wonderful thing when you can get it. It's just that it often doesn't come along until late in the process.

But I don't think it's such a hard question. Let me take a shot at answering it. Are you ready?

To start with, “Where do you get your ideas?” is the wrong question. It assumes that once you have an idea, you’ve got it made. But AN IDEA IS NOT A STORY. Read that again and think about it:

AN IDEA IS NOT A STORY.

A house is built from many different materials assembled in different ways. You may use wood for the frame, cement for the foundation, bricks for the façade. Does it take just one piece of wood, one bag of cement, one brick? Of course not! You need truckloads of material to build a house.

But it’s not just about quantity of materials. How long will the house stand if the frame is built from balsa wood, commonly used in model airplanes? Even a strong wood won’t stand for long if your house turns out to be an apartment building; you’ll need metal studs then.

My point is that since ideas are just building materials for stories, the better questions are “How many ideas do I need?”, “What kind of ideas should they be?”, and “How do I put these ideas together to make a sturdy story?”

Answering these questions requires at least a basic understanding of how to build a story. Any writer can find ideas. They're laying around all over the place, like rocks on the ground.

So it isn't ideas that most writers lack. They lack knowledge about how to assemble ideas, how to craft a story. That's what generates the inspiration to overcome a blank page. The last post I wrote, the post about story building blocks, is an example of the kind of knowledge you need.

You probably have some vague idea for a story. Captain Nexus got started from a simple desire to write something like Star Trek or Star Wars. You can't get much more general than that.

Once you know what kind of ideas you need, they're pretty easy to find. (I'll have to do a post about that sometime, just in case some of you aren't used to doing creative research. It's sort of like prospecting for gold, except you generally find something.)

Once you know how those ideas should be put together, it's pretty simple to sort out the useful ones from the useless ones. (Balsa wood? No, get me those 2x4s over there.)

And once you have the useful ones all together in a little pile beside your computer, it's just a matter of putting them together in different ways until you find something you like. (Kinda like Legos, only cheaper.)

So the real question isn't "Where do you get your ideas?" but "What do you do with the ideas you have?" Once you know the right question, it's not so hard to answer.

You won't even need an alchemist's address.

The cartoon came from the Calvin and Hobbes wiki.
Posted by Mick at 10:35 PM

Email ThisBlogThis!Share to TwitterShare to FacebookShare to Pinterest
Labels: getting ideas, how to write easy readers, writing easy readers